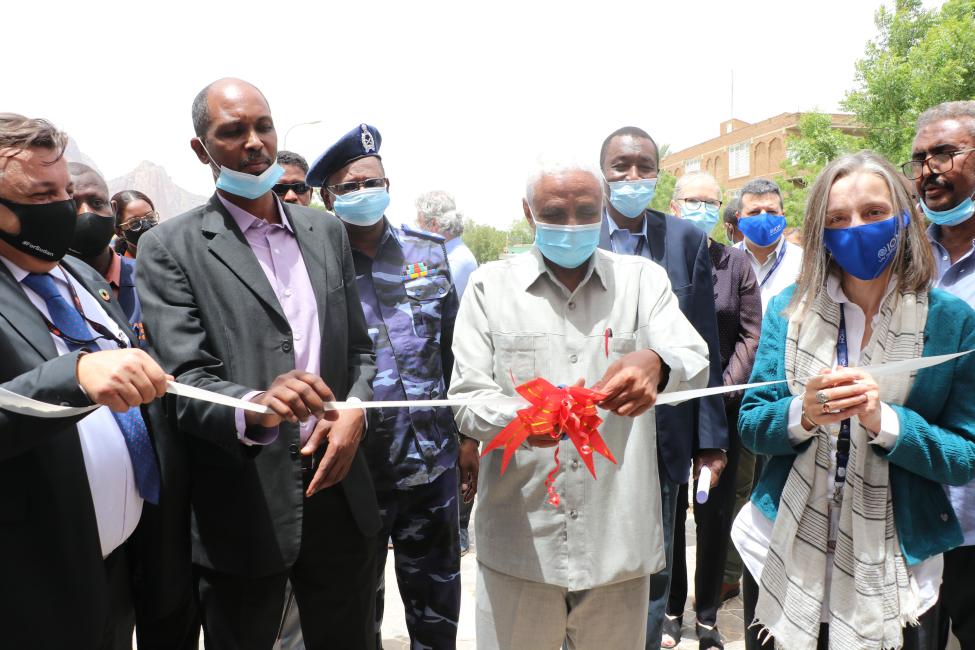 IOM opens a new sub-office and Migrant Resource Centre (MRC) in the eastern Sudanese state of Kassala near the Eritrean border. Photo: IOM

Khartoum – This week (22/06). The International Organization for Migration (IOM) has opened a new sub-office and Migrant Resource Centre (MRC) in the eastern Sudanese state of Kassala, located near to the Eritrean border - a strategic location and key route for migrants.

Kassala is one of the vital migration routes through the Horn of Africa with a mixed migration flow of people from Ethiopia, Eritrea and other neighbouring countries in the region. For many on the move, it is the first place they reach on their migration journey.

Due to prolonged conflict and displacement, environmental deterioration and other disasters such as drought and floods, Kassala state has for long suffered lack of basic infrastructure and services such as health, water, sanitation and hygiene (WASH).

Most recently, the impact of the influx of Ethiopians fleeing violence in the Tigray region of northern Ethiopia has become among one of the major challenges for the region as thousands have sought refuge in Kassala and Gedaref states, eastern Sudan.

“With the opening of our new office, I greatly look forward to a strengthened level of cooperation between IOM and the Government of Sudan in Kassala,” said Catherine Northing, IOM Sudan Chief of Mission, speaking at the official opening ceremony. “An increased presence on the ground in Kassala will enable a closer cooperation with the government and community partners and allow a quicker response time to meet the needs of those most vulnerable.”

Funded by the Italian Ministry of Foreign Affairs and the European Union, the newly opened office will also include a resource centre for migrants. The drop-in centre, serves as a one-stop support centre for vulnerable migrants transiting through, living or stranded in Sudan, including victims of trafficking, and unaccompanied migrant children.

The MRC acts as a vital entry point for vulnerable migrants looking to access accurate information on specialized services and referrals to service providers in health, legal and protection matters.

The MRC is the third of its kind in Sudan and complements the services provided by the two other MRCs operated by IOM in Khartoum since 2015 and in Gedaref since 2019.

The opening of the new office was coordinated closely with the Federal Ministry of Foreign Affairs, the Kassala State Ministry of Social Development and the Humanitarian Aid Commission (HAC).

“There are many challenges that have impacted stability in the state of Kassala and East Sudan. We acknowledge the many difficulties and threats that many migrants face on their journey,” said the Acting Governor of Kassala State, Mr. El Tayeb El Sheikh. “We are pleased that IOM has opened an office here and we look forward to working together.”

“I am happy that we reached this point in our partnership with IOM, not only in sharing offices in Kadugli and now in Kassala, but also to provide better integrated services for the populations we serve,” said Mr. Massimo Diana, UNFPA Representative in Sudan during the opening ceremony.

The Acting Governor of Kassala State, Undersecretary of the Ministry of Social Development (MoSD), Director General of the State MoSD, Ambassador of Norway, and representatives from the Italian Embassy, Netherlands Embassy, government and local partners – all attended the official opening of the new sub-office.

IOM has been operating in Sudan since 2000 with now nine sub-offices located across the country. In Kassala, IOM has been implementing and supporting several humanitarian and emergency activities since 2004; ranging from WASH interventions, community stabilization, disarmament, demobilization and reintegration (DDR), counter-trafficking, provision of shelter and non-food items, as well as supporting the COVID-19 response efforts in the state.

Introduction to Determinants of Migrant Vulnerability in Sudan

Introduction to 'Migrants in Countries in Crisis' Guidelines in Sudan

Subscribe to IOM newsletter to receive the latest news and stories about migration.